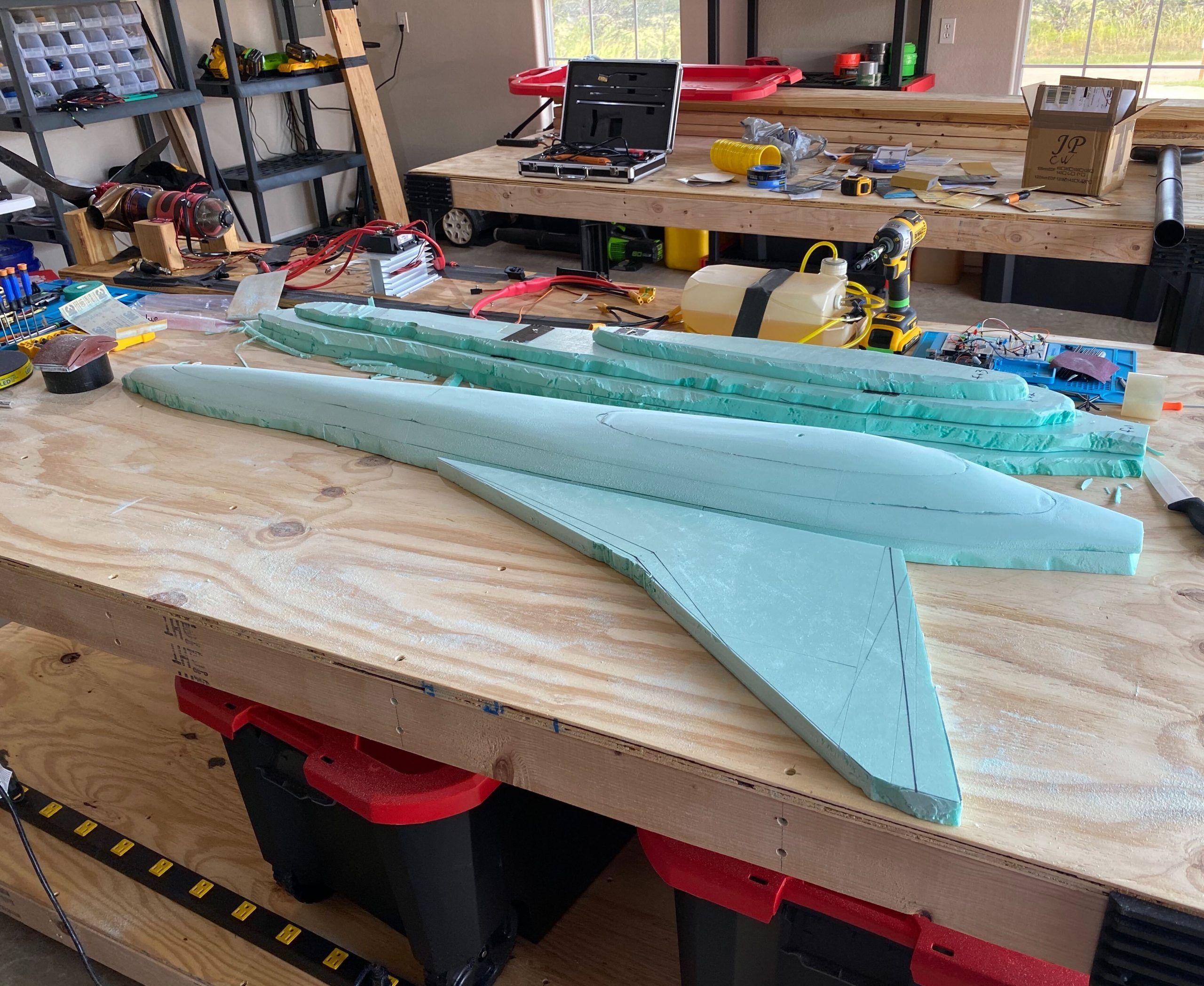 When an aircraft flies, its entire surface area interacts with the air in a complex and fascinating manner. As the speed of this aircraft increases, and as it enters different flow regimes, different phenomena present themselves. The influence of these dynamic interactions present a multitude of challenges that need to be addressed in order for our goals at the Project Boom: world-record speeds and supersonic flight, to be realized.

One parameter, or rather a bunch of parameters that influence how our drone will interact with the air, is the airfoil. The airfoil is the shape that represents the cross-section of the wing. Though it seems like a small portion of the overall aircraft, in his book “Aircraft Design: A Conceptual Approach”, Raymer credits the airfoil as being the heart of the aircraft. Further illustrating the importance of the airfoil, and the impact that it has on the aircraft, is the fact that it has been undergoing various edits and iterations from myself and other aerodynamics team members for nearly 3 months at the time of writing, since it is such an integral component of the drone.

One of the key objectives of airfoil design and selection is the reduction of drag. This rather high-level objective consists of various lower-level ones, and provides a set of constraints and criteria that correspond to metrics such as thickness, camber, and design lift coefficient, among others.

However, the process of selecting an airfoil is a little bit more complicated than just picking some numbers, throwing a shape on a plane, and breaking the sound barrier. The complex nature of fluid flow, particularly at high Reynolds numbers, highlights the convenience of reference designs and historical data when one seeks to design or select an airfoil.

One of the current airfoil concepts is a NACA 64106, which was designed and selected by Jesé Chávez and yours truly, both from The Project Boom Aerodynamics Subteam. It was designed on OpenVSP, along with seven other airfoils from the NACA 6 series.

The NACA 6 series was chosen as our initial scope because research suggested that for our applications, which are high-transonic and supersonic flight, they are the ‘jack of all trades’ in comparison to supercritical or double-wedge airfoils, which each have weaknesses in the upper or lower ends of the range of speeds that we anticipate reaching.

The other seven airfoils were the NACA 63A106, 64A106, 65A106, 63106, 65106, 66106, and 67106. These are all very similar-sounding, but preliminary analysis on XFLR5 confirmed that they are, in fact, different. The 64106 was selected initially because it offered the lowest zero-lift drag coefficient, which as you may have guessed, is the drag  coefficient at zero lift. We intend on complementing this airfoil with a cranked delta wing platform.

However, there are more factors to consider, which will emerge and become more concrete as we make more progress and begin to incorporate more specific requirements from sub-teams such as Structures and Stability and Control. We may be presented with competing objectives, which will necessitate more rigorous and detailed design decisions, with some more fancy tools.

Another key development as we look to higher-fidelity aircraft prototypes is computational fluid dynamics as a means of validation; one of those fancy tools I mentioned. Though reference designs and historical data make great starting points, one goal at The Project Boom is to make unprecedented progress in civilian drone flight. We intend on creating the fastest civilian drone in the world, and redefining what is possible for student design teams. This means that we will be accessing a relatively new realm of application for small aircraft, and will hence be unable to fall back on the wealth of research offered by what’s already been done – this has never been done.

Consequently, we are going to need to run simulations using computational fluid dynamics, in order to better understand what challenges our design will pose in a cost-effective manner (flying and breaking infinite planes would be fun, though).

Prior to a recently-acquired partnership with Nimbix, the simulations that we had developed using the software that was generously provided by Siemens and SOLIDWORKS were going to take approximately 26 days to run and were in some cases completely impossible to run on our own computers, that is, without a substantial loss in the reliability of the results.

26 days is a very long time to do math, and accessing the sort of computing power that we needed previously proved itself to be a substantial bottleneck as we progress toward better understanding our designs. However, access to high-performance computers will allow us to make more informed decisions and obtain relevant and accurate numerical data that will support or oppose our decision on the current airfoil concept.

In short, fluids are weird and math is hard. However, our team of student engineers is committed to redefining limits and making a name for the Project Boom on the leading edge (pun intended) of aviation.