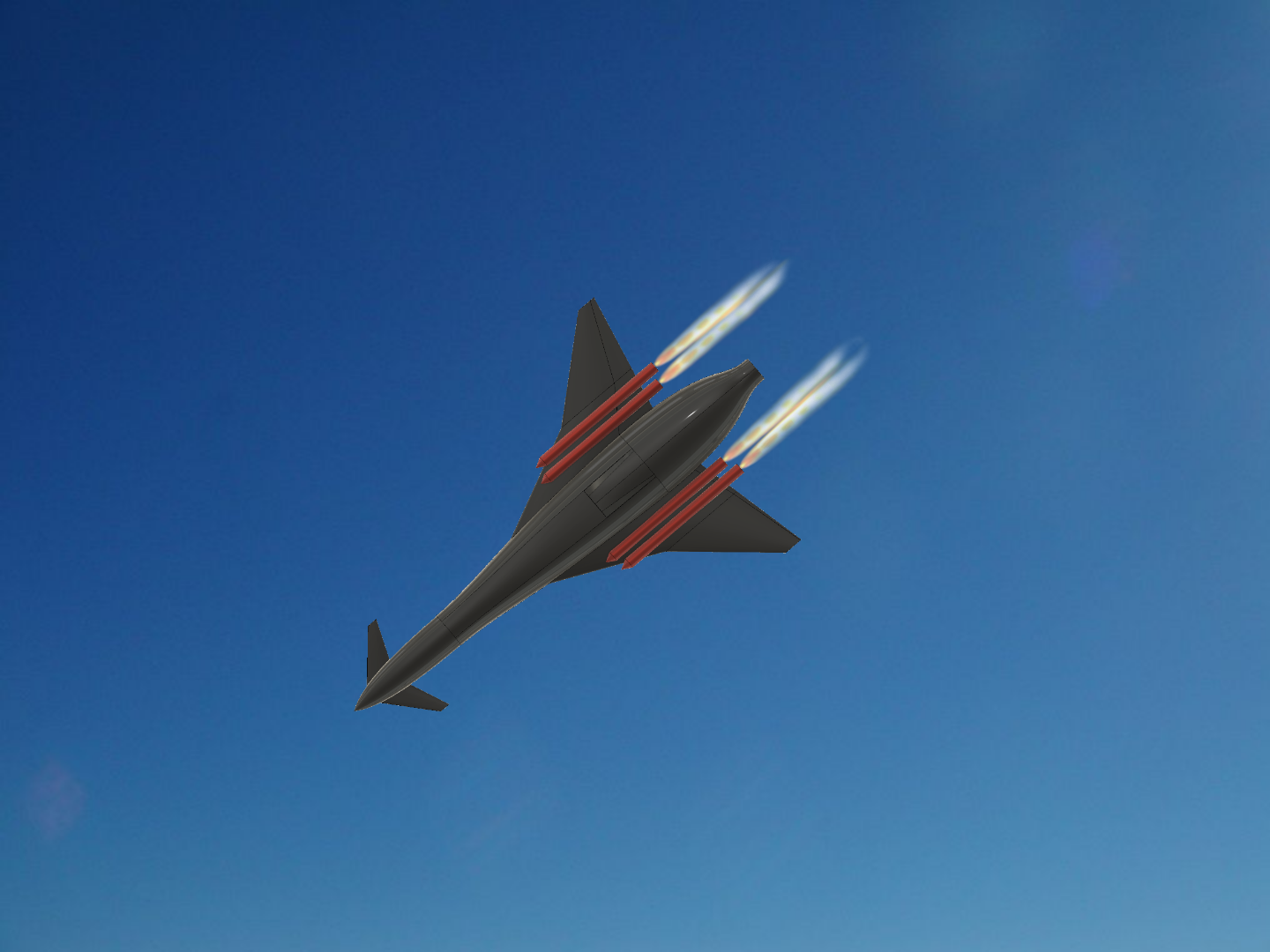 Written by on November 1, 2020. Posted in Design Journal.

As we move to phase two of the project, one of the challenges to be faced will be gaining enough thrust to move past the sound barrier. As Mach 1 is approached, shockwaves form on the aircraft wings which consume high amounts of energy and lead to an increase in drag. The thrust of the jet engine alone isn’t enough to overcome this, but solid rocket engines under the wings are a way of providing the necessary short burst of additional thrust to accelerate the plane to supersonic speeds.

We knew we needed an impulse of 3000Ns from the rockets, but I wanted to know if we should use 2 larger engines or 4 smaller ones, and how they should be configured. A single rocket design was quickly ruled out, since due to the position of the jet engine, its thrust would not act through the centre of gravity. This would lead to a moment, causing the plane to turn. Similarly, 3 rockets would have to be placed in a triangle around the jet engine which would be difficult to blend aerodynamically, and if one of these were to fail this would form an off-axis moment which would be more difficult to correct for, increasing the chances of losing the vehicle; so this configuration was also discarded.

I first looked at the probability of an engine failure, but most engine manufacturers don’t publish how often their engines fail to ignite – mainly because this probability is alarmingly high! So I generalised my calculations for all probabilities and no surprises – when you use twice as many engines the probability of a single-engine failure is much higher. But, the severity of a failure is lower and if using an engine like the Cesaroni J150-P which provides a combined impulse of 3800Ns, you should still have enough thrust to reach Mach 1. Albeit there will be a thrust imbalance causing the plane to turn quite significantly, this isn’t as significant as in a 2 engine system, and the plane has a higher chance of landing safely.

But even if the engines don’t fail, they are hobbyist motors made to fairly high tolerances, and the thrust of each engine is bound to differ slightly causing ‘yaw moments’ which cause the plane to turn. While these thrust differences are random, I wanted to know if, on average, a 2 or 4 engine configuration would produce a larger yaw moment…

I wrote a Python script that models the thrust of each engine to follow a ‘normal distribution curve’ shown in the figure below – the thrust of a randomly selected engine can fall anywhere on the curve, but it is more likely to fall closer to the peak. Next, the script selects 2 or 4 engines, places them on the plane, and calculates the difference in thrust across the wing. The larger the thrust difference, the larger the yaw moment and the plane turns at a faster rate. To reduce random errors, this process is repeated 10,000 times and then repeated for 100 different ‘standard deviations’ – which is a measure of how precisely the engines are made; a lower standard deviation equates to a higher precision. To allow comparisons between different engines, the calculations were generalised by calculating this thrust difference as a percentage of the total thrust. The program concluded that on average you get a 40% larger yaw moment with a 2 engine system compared to 4, assuming the engines in both configurations are made to the same percentage tolerance and are placed in the same positions on either side of the wing. So after discussing with the propulsion team we decided on a 4 engine configuration.

The rockets will be placed as close to the jet engine as possible to reduce the magnitude of any yaw moments, with the rockets forming a line as this is easier to blend with the body and constrains any turning moments generated to a single horizontal axis.